Due to the current health crisis please note that ALL Faversham Society facilities will be closed with immediate effect and until further notice - see latest blog post for more information
If you love Faversham, join us. We seek to Cherish the Past, Adorn the Present, Create for the Future

The VIC56 is an 85 foot steamship, constructed in 1945 as part of the wartime shipbuilding programme, and now preserved in working order by a small group of volunteers. Vic 56 is technically a steam coasting lighter or a "puffer". She is one of the 98 Victualling Inshore Craft built to the orders of the Ministry of War Transport between 1941 and 1945, which were a part of the enormous Government wartime ship-building programme.

VIC 56 was one of two built by Pollocks of Faversham. Henry Clearly, the owner of VIC56, will be coming to speak about the boat at a members and guests evening. With efforts to create a Heritage Harbour here in Faversham now is a good time to consider whether VIC56 should come home to Faversham.

Further information about VIC56 is available on her website http://www.vic56.co.uk 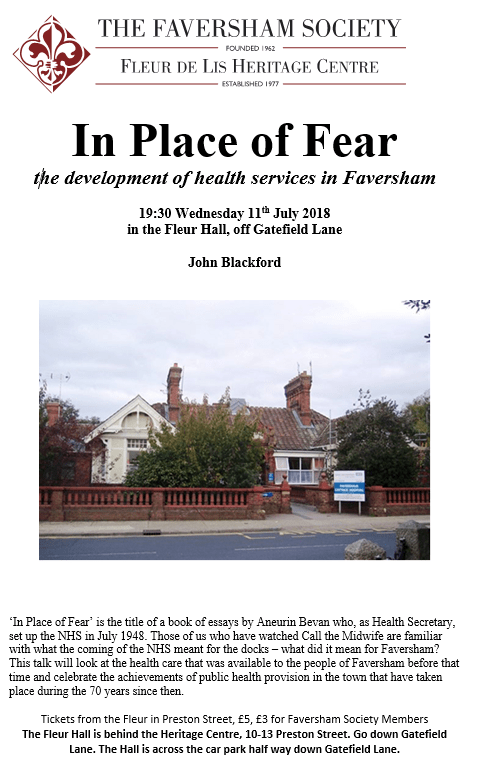 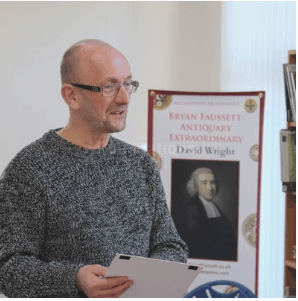 Tickets from the Fleur, in Preston Steet,  or on the door. 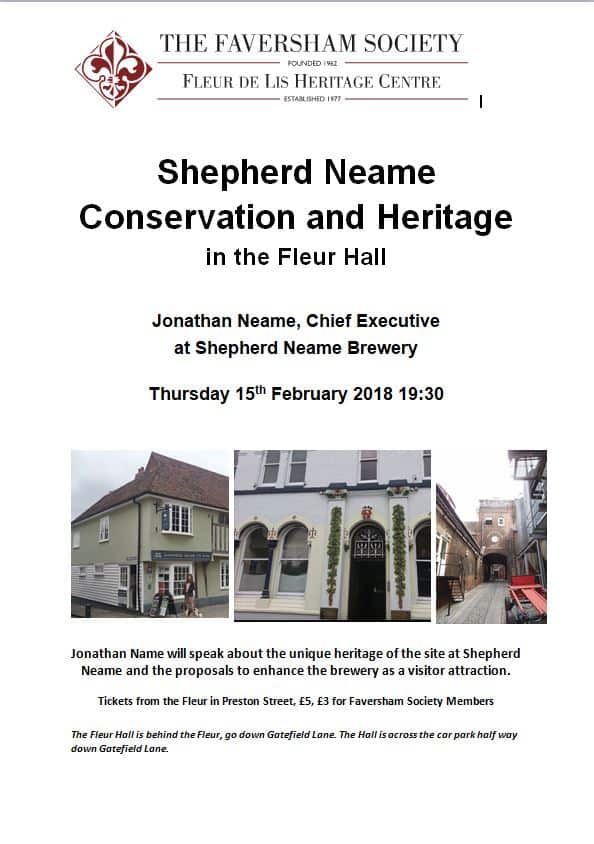 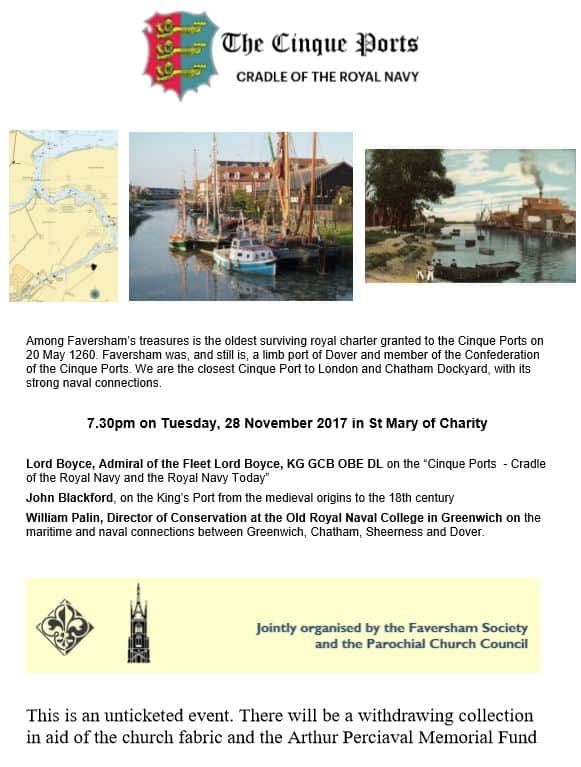 People, Plaice and Chips: Fisheries and sense of place,The management of fisheries tends to focus on economic and biological factors with cultural issues often neglected.

Dr Tim Acott FRGS, Director of the Greenwich Maritime Centre, puts forward the idea that sense of place can be used to make visible a range of social and cultural values that emerge from the process of marine fishing.

He will give a talk, People, Plaice and Chips: Fisheries and sense of place, at the Fleur hall at 7.30pm on Monday, 20  November.

“Sense of place” is an underused concept in resource management in general and within fisheries management in particular but it has potential to contribute to the evaluation of cultural services in a way that is accessible to a broader range of stakeholders, including policymakers and
those involved in developing sustainable communities.

Tickets are £5, or £3 for Faversham Society members

Tim Acott is a Reader in Human Geography at the University of Greenwich. He is Director of the Greenwich Maritime Centre and is currently the Chair of the Coastal and Marine Research Group at the Royal Geographic Society. Over the last 8 years he has worked extensively on understanding the social and cultural importance of fisheries through sense of place and cultural ecosystem services. He has co-edited two books, ‘Social Issues in Sustainable Fisheries Management’ (2014) and ‘Social wellbeing and the values of small-scale fisheries’ (2017) and has published numerous articles. His most recent research is leading a project exploring the socio-cultural values of wetlands.

Dr Tim Acott graduated with a BSc Hons in Environmental Science from the University of Plymouth in 1989. He subsequently completed a PhD at the University of Stirling and started to lecture at the University of Greenwich in 1993. His academic interests revolve around a social science perspective on environment and sustainability issues. To explore this subject area he crosses a number of subject boundaries including: environmental ethics, sustainable development, landscape, sense of place, environmental sociology, social and cultural dimensions of marine fisheries, GIS, actor network theory, hybrid geography, wildness, sustainability, allotments as hybrid spaces, and qualitative research methods. In addition to his academic portfolio Dr Acott also actively explores different environments through painting and photography. 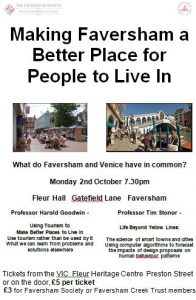 Tim Stonor & Harold Goodwin – two trustees on their day jobs and their relevance to Faversham.

This event is in the Fleur Hall and is jointly organised with the Faversham Creek Trust. October 2nd 19:30

Tickets £5, for members of the Faversham Society and the Faversham Creek Trust there is a discounted price £3. Tickets available from the Fleur in Preston Street.

The science of smart towns and cities

Tim Stonor is an architect and urban planner who advises public, private and community organisations worldwide. In the course of his career, he has pioneered the development and application of "predictive modelling" - using computer algorithms to forecast the impacts of design proposals on human behaviour patterns. His projects include the redesign of Trafalgar Square and the creation of the Queen Elizabeth Olympic Park.

Closer to home, Tim is a trustee of the Faversham Society, a member of the Town Council's Public Realm Group and a member of the Friends of the Westbrook and Stonebridge Pond. He is closely involved in the campaign for a 20mph limit across the town. In recent years he led a widely-supported campaign against the painting of yellow lines in the town centre. He is currently opposing the further painting of double yellow lines around the Guildhall, proposing instead a design-led scheme that includes planters and seats.

Using Tourism to Make Better Places to Live in

The aspiration of Responsible Tourism is to use tourism rather than to be used by it. Tourism can bring economic benefits, trade and jobs – there is little doubt that Faversham would not have such a rich variety of quality food and drink if we did not a attract tourists and day visitors. Overtourism is emerging as an issue in more and more destinations – what can we learn from problems elsewhere to ensure that in Faversham we maximise the positives and minimise the negatives.

Arthur used always to repair to the Bear after his classes, for the Faversham Society lectures we plan to follow in his footsteps. We’ll repair to the Wine Vaults opposite. 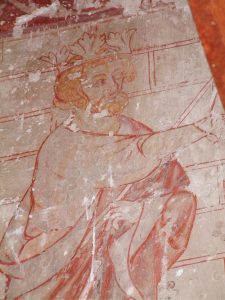 Professor Paul Binski, Professor of the History of Medieval Art and Fellow of Gonville and Caius College, lectured on the history and significance of the wall paintings presently obscured by the organ in St Mary of Charity. Paul Binski's lecture attracted between three and four hundred people.

Paul rates the wall paintings, which date to about 1300 as amongst the best 10 in the country. The rare surviving mediaeval column was dated to between 1240 and 1260 by Paul Binski. 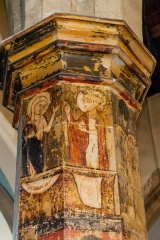 There is more about the church here http://builttoinspire.org/inspiring/