Faversham has a wealth of Gunpowder Heritage with many structures around the town as a reminder of the importance of gunpowder in our history not least Stonebridge Pond, and three museums: the Chart Gunpowder Mill, the Gunpowder Room in the Fleur, the Marsh Works, and the Oare Gunpowder Works.

John Owen spoke on Faversham and the Defence of the Realm pointing out that Faversham is closer to the French coast than to Trafalgar Square and that Faversham had contributed men and materials to many wars. The East Kent Impress Officer Admiral Keeler lived in the town and men from Faversham were pressed for naval service as well as to provide skilled workers to the Naval dockyards and the line of ordnance: Sheerness, Chatham, Deptford and Woolwich.

The early years of  Faversham gunpowder production are not well documented, there are C16th references but nothing in the early C17th. Daniel Judd began production in 1655. In 1667 UK production of gunpowder amounted to 36,000 barrels of which 2,500 (7%)  were produced in Faversham.  Gunpowder was important to the prosperity of the town but demand, production and employment fluctuated wildly depending on to what extent it was required for conflict. However, in the early C19th gunpowder provided perhaps 20% of male employment in Faversham. By the 1820's it employed only 20 men. 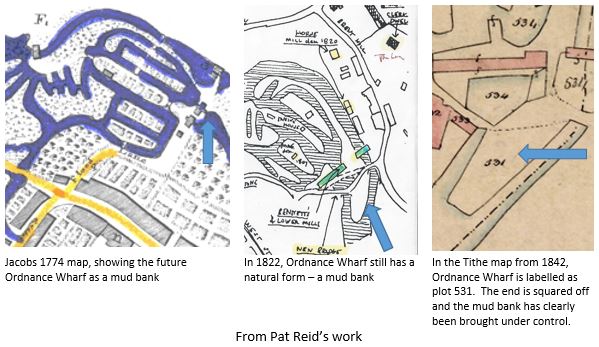 The Origins of Ordnance Wharf - post-Napoleonic

Pat Reid then talked about the archaeology of  Ordnance Wharf, situated between two outlet channels from the former Gunpowder works that correspond to the two main mills, Lower Mills to the east and Bennett Mills to the west. This small tongue of land was formed by the scour of these two channels either side, stirring up silt, and the slack water between the two channels causing the deposition of this silt. Ordnance Wharf is, in short, a mud bank. In Jacob’s 1774 map of Faversham, it is a simple, roughly triangular spit. The 1822 map shows the natural form of a mud bank. By 1842, however, according to the well-surveyed tithe map of 1842, it has a regular squared off shape implying the building of a revetment, and it is named Island Wharf, which implies usage by vessels.  The 1867 map shows this artificial form very clearly.  The revetting is brick, and a great deal of hardcore must have been deposited inside the brick walls to create a flat and firm surface.

Pat covered the site's more recent history:  The building, nowadays known as the Purifier, was built to manage the purification process but the actual Guiseley purifiers, which produced toxic waste material (cyanide), were on Ordnance Wharf, as it had become known. Gas production ceased in 1957 and the purifiers were removed, although the site continued to be used for storage and repairs until 1992. Ordnance Wharf was left as a derelict and potentially toxic site.

The Society has a number of papers published on Faversham and gunpowder. 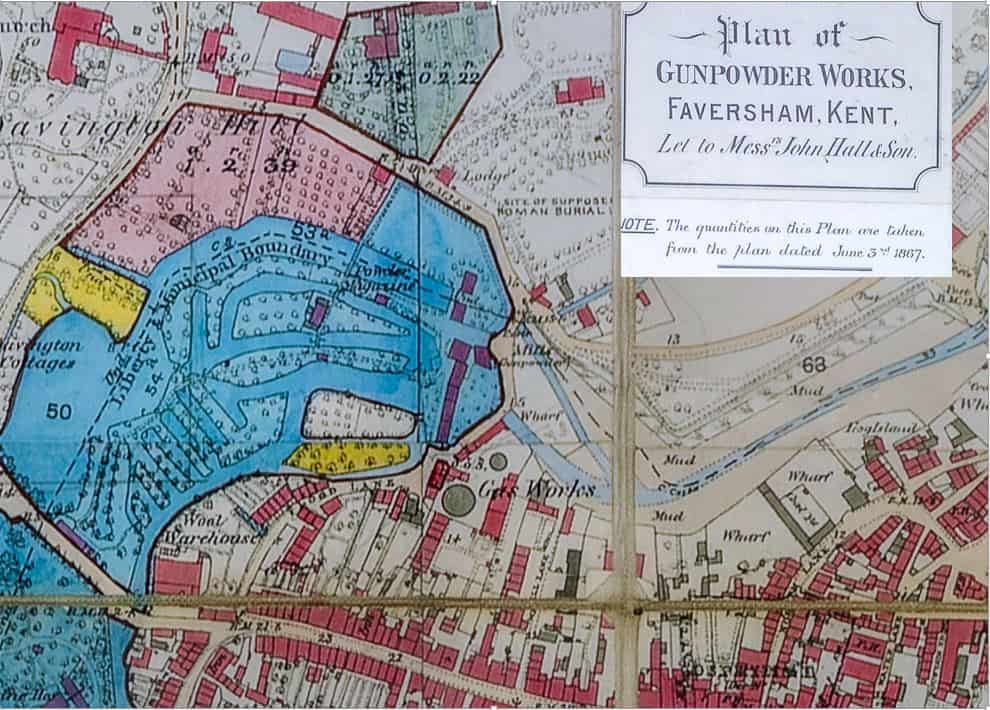 Want to be notified when a new post is added?
October 4, 2018
Gunpowder, History, Ordnance Wharf