1086
William the Conquerer’s Domesday Book recorded that Faversham was a royal manor, with a market and two salt-houses.

The entry for Faversham roughly translates as "In Faversham Hundred King William holds Faversham. It answers for 7 sulungs. Land for 17 ploughs. In lordship 2. 30 villagers with 40 smallholders have 24 ploughs. 5 slaves; a mill at 20s; meadow, 2 acres; woodland, 100 pigs from woodland pasture, 31s 2d; A market at £4" 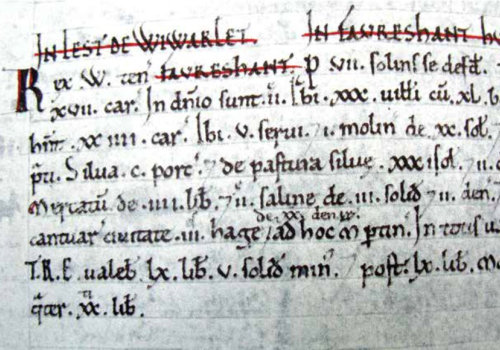 Approx. 1100
Faversham’s parish church was rebuilt in Romanesque style, with an aisled nave and central tower.

The great Abbey of St Saviour at Faversham was founded by King Stephen and Queen Matilda. It was built just to the north of the town centre and overlooking the creek and intended to be the burial abbey of a new dynasty, but only Stephen, Matilda and their son Eustace were buried there.

The huge abbey dominated the town, and the abbot became lord of the manor of Faversham. This led to a fiery relationship with the townsfolk as he had the power to demand taxes, tithes and penance.

1153
Davington Priory, a nunnery with a Romanesque church, was founded by Fulke of Newnham, near Faversham.

1230
The Maison Dieu was founded at Ospringe, to serve as a royal lodge, pilgrims’ hostel and home for retired members of the royal household.

1252 & 1260
Faversham’s first two surviving charters gave it powers of self-government and independence from the rest of Kent.