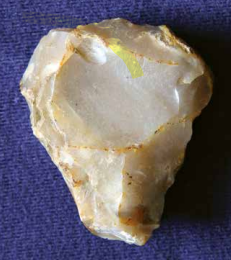 Approx. 200,000BC
This flint hand axe was found during the Faversham Society Archaeological Research Group (FSARG) excavations in 2011. It was lying underneath a Bronze Age group of flints, opposite Ospringe Parish Church.

It was made by an ancestor of Neanderthal man, as Homo Sapiens didn’t arrive here until approx. 40,000 BC.

Approx. 10,000BC
At the foot of two of the valleys formed during the last Ice Age, two saltwater creeks formed, Faversham and Oare. This gave the area ready access to the sea and the chance to export local products and import those it needed.

Approx. 2,500BC
Until now tools were fashioned mainly from flint. With the start of copper mining elsewhere in Britain, metalworking, and the Bronze Age began.

Approx. 800BC
Iron tools began to be made. Thin seams of ore were discovered locally, at Boughton-under-Blean, where there is still an Iron Hill. More immigrants from the Continent arrived in Kent, bringing with them their technological and farming skills.

Approx. 100BC
Coins began to be minted in Britain, which, by now, was divided into small kingdoms. Farms were now a common sight. The borders of the huge Roman Empire were close at hand, just across the narrow sea, in France. Kent traded with it, importing goods and exporting produce. The native language was probably Celtic, akin to present-day Welsh.

The museum will be open as follows:
21st July to 27th August
Thursday, Friday, Saturday 11am to 3pm
FREE ENTRY
Further openings will be announced and are dependent on building work