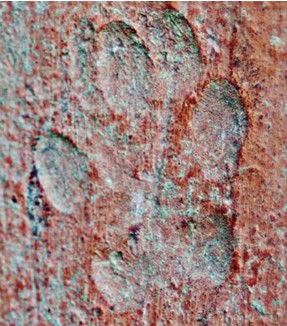 55 & 54BCE
The Roman emperor Julius Caesar invaded Kent but did not leave it occupied. His aim was probably to establish it as a buffer zone from which attacks on France could not take place.

43
At the instigation of the emperor Claudius, a large Roman force invaded Britain and went on to annex most of it. The landings were probably in Kent, one possibly at the mouth of Faversham Creek. Soon afterwards, a settlement was formed at Durolevum, later the site of Syndale, known nowadays as Judd's Folly. Among a new network of arterial roads built by the Romans was the London-Canterbury-Dover road, known later as Watling Street and now as the A2.

Approx. 70
A luxurious Roman villa succeeded the Iron Age farm which had been built in about 40BC near what is now Abbey Farm. With extensions and alterations, it lasted till AD250-280. Other villas were built at intervals of about a mile between Sittingbourne and Hernhill along the spring-line.

This Roman villa was discovered in 1965 when the Queen Elizabeth Grammar School was being built. The roof tile, on display in the Fleur Museum, would have been made on site from local clay and left to dry in the sun. A passing dog has walked over the drying tiles and left its footprint on the tile for us to see 2000 years later.

Approx. 225-375
Many cremation burials took place in a Roman cemetery alongside the A2 between Durolevum and present-day Ospringe.

Finds from these graves are on show at the Maison Dieu, Ospringe.

Approx. 350
A Roman mausoleum or shrine was built at Stone, just west of Faversham and near Durolevum. Part of the building survives today, underneath the ruins of a small Anglo-Saxon and medieval chapel of Stone-next-Faversham. It’s the only Christian building in England to incorporate the remains of a 4th century Romano-British pagan mausoleum.