1960
Between Court Street and East Street, Crescent Road opened as a short internal relief road to eliminate congestion in Market Street, where there was no room for two-way traffic.

1964
Shepherd Neame brewery’s deliveries to local pubs by horse-and-cart ended with the death of Charlie, their last cart horse.

1966
The Faversham Society published plans for the pedestrianisation of upper West Street and these were later implemented, alongside others for pedestrian-priority schemes.

1975
Pollocks, the shipyard, closed for the last time.

1977
The Faversham Society opens a heritage centre, comprising the first town museum, a bookshop and archive, at the former Fleur de Lis inn in Preston Street. The complex later expanded to include Nos 10-11 and 12 Preston Street.

1980s-1990s
The east (town) bank of the Creek de-industrialised and the waterway ceased to see freight traffic. New housing and a supermarket took the place of the gasworks, mills and factories. Standard Quay became a centre for the maintenance of preserved sailing barges and similar vessels. 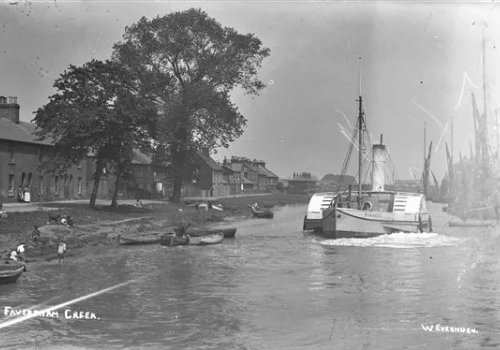 Unlikely to see a return of steam ships, as this shown in another image from the Arthur Percival Archive. Galleries | My Site (arthurpercivalarchive.co.uk)

2011
As the creek navigation continued to silt up as a result of lack of commercial use and general neglect, an ad hoc trust was formed to raise funds for dredging and the creation of a facility for training in traditional shipping maintenance skills. It’s aim is to restore Faversham Creek as a working waterway. For more information: Faversham Creek Trust | faversham, Kent