Up to World War I

Early 1900s
Goal-running became a popular local sport. No gear was needed apart from a grassy field and three posts. Its popularity waned after the First World War and later attempts to revive it were unsuccessful.

1910
A roller-skating rink opened in a former barge-building shed in Brent Road. About 20 years later a Faversham roller-hockey team, playing as an England one, amazingly won the world title! This photo of Faversham Creek shows the Skating Rink in the background 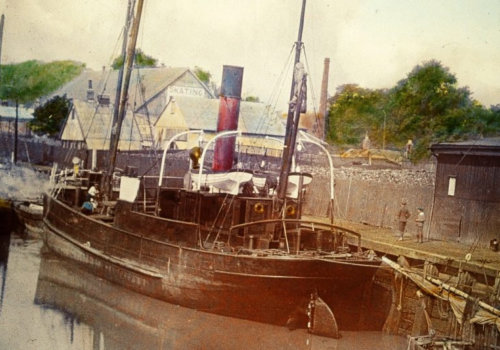 The full story of the Skate Boys of Faversham and many other areas of the interesting history of our town have been researched by enthusiastic volunteers. These Faversham Papers are on sale in our Visitor Information Centre. A full list of the publications can be found here: Publications - The Faversham Society

1914
When the First World War began, the local explosives factories were requisitioned by the Admiralty. Scores of refugees from Belgium arrived in the Faversham area.

1916
The metre-gauge Davington Light Railway opened to serve the high explosives factories at Uplees. One of the UK’s shortest-lived lines, it closed in 1918. Its three tank locomotives found their way to Brazil, where two survive as museum-pieces.

1917
At the request of the Admiralty, a Scottish firm of shipbuilders, Pollock’s, opened a shipyard on the Brents bank of the Creek. It was to build hundreds of vessels, from lighters to tugs, tankers and trawlers.